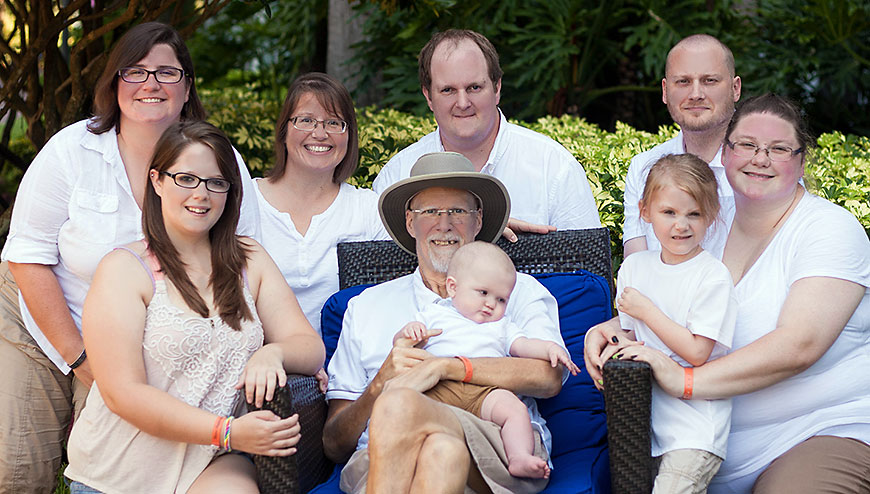 Even as a young man, Paul Moreno understood the importance of life insurance. During his 20s, when he was working as a waiter and bartender, he wasn’t offered coverage through his employer, so he purchased his own policy from an agent.

“He always felt it was very important because we’re not promised tomorrow,” says his widow Stephanie. “We had children. We have obligations to our families. We have both always carried the most life insurance we could.”

After the birth of their third child, Paul approached Stephanie with his plan to go back to school to pursue his passion for teaching. Several years and a couple of degrees later, Paul took a job as a special education teacher with Birdville Independent School District (BISD) in Texas. The school district generously covers a $10,000 basic life policy for its employees, but as soon as he was eligible, Paul signed up for additional voluntary life insurance, eventually reaching $250,000 in coverage.

“Every year, when Birdville allowed employees the chance to increase their life insurance, he would up it a little bit more just so he was always carrying the most he could,” Stephanie says.

As it turns out, that proved to be a smart decision. In 2009, Paul was diagnosed with renal cell carcinoma and had surgery to remove the 8 cm tumor in his right kidney.

“We thought he’d beat it,” Stephanie says. “For two and a half years, he was tumor free, but it came back and it brought friends.”

In 2011, a routine scan found that he had 15 tumors that had spread to both lungs.

They reached their goal and even had the opportunity to travel to Rome and visit Disney World twice. The couple also saw their middle daughter get married and were there when their two grandchildren were born.

Eventually, Paul’s health deteriorated. When the doctors told him that he wouldn’t be able to get back into the classroom for the 2016-17 school year, the couple started to worry about how they’d pay for Paul’s care and a prescription that cost $14,000 a month, especially without his income.

In conversation with Babs Holly, BISD Benefits Specialist, Stephanie learned about an option called the accelerated life benefit (ALB). The benefit would allow the couple to get an advance on up to 75 percent of Paul’s life insurance benefit. Kim Bulleit, the OneAmerica® account manager for BISD, helped Stephanie set the wheels in motion, connecting her with Judy Esselborn, Manager of Group Claims, who ushered Stephanie through the ALB process.

“That was a very stressful time in my life,” Stephanie says. “I was under extreme pressure. I don’t remember everything. But there’s a quote and the thought behind it is, ‘You don’t always remember what people say, it’s how they make you feel.’ I felt extremely taken care of. From the time that I started emailing and talking with people at OneAmerica, everyone took good care of me. They cried with me. I never worried. I just always felt a calm, and taken care of, and listened to and understood. I remember feeling that they cared about us and our story. It made me feel at peace during a time when it was really not very peaceful.”

After Paul’s death, Stephanie notified OneAmerica and received the remainder of his life insurance benefits by check. There was also a small surprise – additional benefit interest that had been earned between the date of his death and the date the check was written.

“That touched me. I don’t know why. It was only about $50, but I was like, ‘wow.’ I felt like that was going above and beyond. It was just a small amount, in the scheme of things, but it’s the thought that counts. It really blew me away.”

Thanks to the OneAmerica, Stephanie has been able to purchase a new home, pay off a car and pay off credit card debt with her life insurance benefit.

“It hit me the other day,” she says. “I have all these things, but I don’t have a husband. It’s a really sad tradeoff, but he did take care of us and that was very important to him. That’s why he wanted life insurance. He wanted to know his family was taken care of. And we are.”

NOTE: Products issued and underwritten by American United Life Insurance Company® (AUL), Indianapolis, IN, a OneAmerica company. Not available in all states or may vary by state. Clients testimonials are the personal views of a select group of clients of the companies of OneAmerica. These clients are not related to any employees of any OneAmerica company and were not paid to express these views. These opinions are not necessarily indicative of future performance or results and may not reflect the experience of all clients.