In 2018, we conclude an ambitious makeover that gives over 2,000 associates reimagined offices

In 1982, when American United Life Insurance Company® (AUL), now a OneAmerica company, first moved over 900 employees from our campus along Fall Creek Parkway to the Downtown tower at One American Square, it occupied less than one-fourth of the new building.

Since then, we’ve grown in an upward trajectory. 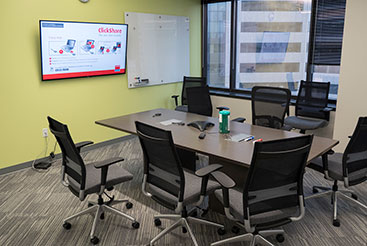 These days, you can find Indianapolis-based associates in a third of the tower – on floors 2 through 13, 17, and part of 16, — in addition to our Corporate Support Services building on North Street and the third floor of the nearby historic Gibson Building. We also have corporate offices in Wauwatosa and Appleton, Wisconsin, and San Diego, in addition to more than a dozen regional sales offices throughout the United States.

The OneAmerica associate headcount surpassed 2,000 in 2017. About 1,540 are based in downtown Indianapolis. That doesn’t include contractors and temporary employees.

Starting in 2014, we’ve remodeled most of the floors where associates work. The last group of associates to experience the newer, open-concept floor plans will be transitioned in fall 2018.

“I’d argue we rival any workspace in the city for comfort, amenities and tech tools,” said Watson. “We shouldn’t ever be finished; we should constantly look to do what we can do better in terms of the tools all associates have.”