A Bunch of Characters

What our signboard said in 1976

You may have chuckled or groaned reading the catchy sayings on the twin signboards at our Indianapolis headquarters.

But have you noticed the words beneath each marquee: “Life Insurance, Retirement, Employee Benefits”?

Those are our OneAmerica® business lines, and to our company and customers, they are no joke. For us, signboard sayings go beyond mere levity. They are a way to interest people in what we do. And that story is more than three witty lines.

“For 140 years, OneAmerica has been committed to serving our customers and our community,” said Scott Davison, current OneAmerica chairman, president and CEO. “The signboards are part of that community — a 60-year civic tradition. Although the signboard sayings are light-hearted, we take that responsibility seriously.”

We estimate that approximately 2,700 different signboard messages have appeared since the debut in November 1958.

Do you know why?

OneAmerica has been a vital part of Indianapolis’ economy — and a national financial services provider— since 1877, when our founding fraternal organization, the Knights of Pythias, offered members a single life insurance product.

What propelled us into a $74-billion-assets- and-counting company – and what led to our signboard tradition – can be traced to 1952, with the election of Clarence Jackson as president of American United Life Insurance Company® (AUL), now a OneAmerica company

That marked the beginning of a new era for the company. Jackson, a New Castle, Indiana, native who joined the AUL board in 1947, is remembered as a go-getter and a fun person with a sharp and uninhibited speaking style.

“They kept telling me this was a non-profit mutual, and I said, ‘By God, we better make some profit,’” Jackson once said, according to “Progress through Partnership,” an AUL history published in 2002. “I said we must turn around and face competition’.” 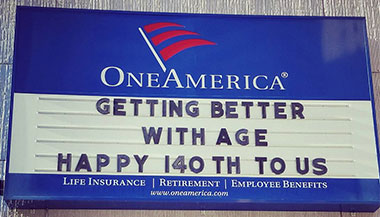 After World War II and following the mergers that led to its formation, AUL was positioned to be a national force in the insurance industry.

In 1954, AUL introduced health and accident insurance, based on long experience in the more limited field of total disability insurance. In 1955, the company’s group annuities business was expanded into a complete group department with a full line of group life insurance and group annuities. The expansion of AUL products also came to include annuities, pension trusts and group retirement plans.

AUL’s spectacular growth into a $1 billion company necessitated more space for the activities of 350 employees, and so in 1957, the cornerstone was laid for a new $2.5 million addition to the north side of our stately headquarters along Fall Creek Parkway.

Because of the prolonged impact that construction had on motorists traveling Fall Creek Parkway, a key roadway, executives felt the need to say sorry to commuters. And so on Nov. 19, 1958, a single signboard was placed at Fall Creek Parkway and Illinois Street, with a two-line message that apologized for the inconveniences caused to traffic.

When construction was done, the signboard stayed. We used the 54 characters to proudly announce a milestone: OVER A BILLION DOLLARS OF INSURANCE IN FORCE. A week later, we wished everyone a happy Thanksgiving. Then, motorists were reminded to drive safely over the holidays. 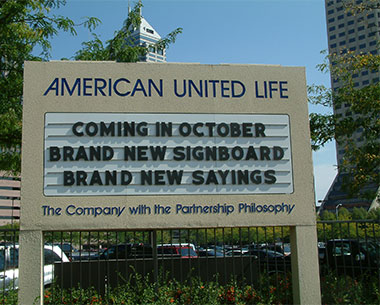 With the arrival of 1959 came our first humorous quip: WHAT THIS COUNTRY NEEDS IS A GOOD 5-CENT NICKEL. The next week the signboard again sermonized about safe driving but this time with humor: AVOID THAT RUNDOWN FEELING-OBEY STOP SIGNS.

Many of the early sayings were attributed to Jackson, and he reviewed AUL associates’ suggestions as well as ideas from the public, but he nixed those that might offend people or been seen as “too preachy.” The company began offering a miniature replica of a signboard to the contributor of quips actually used.  That is still the policy at OneAmerica. (Community members receive congratulations for winning entries and can email entries to corporatecommunications@oneamerica.com.)

Jackson was so connected to the signboard that when he announced his retirement as president in October 1961, he said he’d stay on as “chairman of the board and author-in-chief of company signboards.”

The signboard was redesigned in 1969 when a new AUL logo was adopted; this time a second was added on Meridian Street. Few quips were used more than once but WE AUL WISH YOU HAPPY HOLIDAYS was a repeat favorite.

The last quip at our old address was GOING … GOING … GONE before the move to our current headquarters tower in October 1982.

Before moving into its Downtown tower, AUL was best known around Indianapolis as the company with the signboards and an ad campaign stated “Put the people behind the sign, behind you.”

The signboard has caused stir-ups in the past; it got laughs with quips about women; one year it put up a sign that stated TO BE AN ATHIEST IS A GOD-GIVEN RIGHT” (that lasted only a few days before it was taken down, led to media coverage anyway. That said, newspaper, radio and TV reporters have done a number of stories on the popular signboards, and social media has broadened their visibility.) Check out this 2016 profile in the Indianapolis Star.

When AUL was building its new tower downtown, journalist David Mannweiler (then with the now-defunct Indianapolis News) called and asked if the company would keep the signboards when it moved downtown and was told “probably not,” as they might detract from the building’s appearance.

His articles sparked public interest in keeping the signboards, which were placed on two corners of the employee parking area.

In September 2004, the signs were temporarily removed as it was changed from American United Life to OneAmerica. They returned a month later in a public ceremony that included then-Mayor Bart Peterson. The signboard saying read: CELEBRATE OUR UNITY WITH OUR LEVITY.

Nelson Price, a veteran Indianapolis journalist, author and founder of the 10-year-old weekly radio show Hoosier History Live!, says it’s been well-documented that out-of-town visitors will make it a point to drive past the signboards.

“It’s truly an iconic part of Indianapolis,” said Price. “I know folks in other Indiana towns – Rochester in one case, Bloomington in another – who plan their route to Indy to make certain they swing by and enjoy the latest message/pun.”

Which is why, even as we keep growing, we vow to help keep passersby grinning and groaning.