Terry DeFrain always had a special connection with her aunt, Shirley Grossman. It wasn’t just that they shared the same birthday — the two had shared a tight family bond since Terry was a young girl.

“She didn’t have any children, and I was her oldest niece,” Terry said. “My whole life we were very close.”

Since 2013, Terry was also a caregiver for her aunt, until Shirley passed away at 92 years old this past March. She had needed physical assistance for her daily routines. Over the years Terry had learned the ins and outs of hospital visits, assisted-living and in-home health care. But nothing could have prepared her for the challenges of caregiving during a pandemic.

“I couldn’t imagine what was going to happen,” Terry said. “We had in-home care coming regularly, but when the pandemic began, I knew we couldn’t risk it. I had to stop services.”

It was not a decision made lightly. Terry had always worked to strike a balance between her aunt’s independence and her need for medical care, and Shirley’s long-term care policy with OneAmerica had been a key factor in keeping her at home. If she decided to stop services, it could take time to reactivate the policy.

“No matter what we needed, OneAmerica made it so easy. Both when we first began care and during the pandemic, I was able to focus on helping my aunt, instead of worrying about her long-term care.”
Terry DeFrain 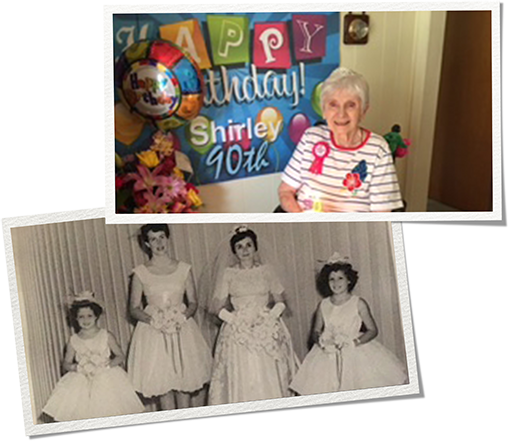 “Long-term care isn’t something you can jump in and out of,” Terry explained. “There’s a waiting period before it begins. Because we had to stop in-home care, my fear was we’d have a long delay before we could get my aunt help again.”

For Terry, a delay such as that could have meant paying for in-home care out of pocket. That's because a claimant is typically required to go through a new waiting period as well as a new assessment, in order to resume care.

But continuing care was also a risk. Allowing aides to enter the home at the height of a pandemic meant potentially exposing the household to COVID-19.

Terry didn’t know what to do. Then she called her claims manager at OneAmerica. “That’s when we learned that OneAmerica was offering a grace period because of the pandemic. It allowed us to stop in-home care without having to start the process all over again and cover the expenses ourselves,” Terry explained. “We could still bring in help quickly when we really needed it, and we could stop in-home care when cases would spike. It was such a relief to have that option.”

While the pandemic continued to present challenges, Terry was grateful for the help she received for her aunt.

“No matter what we needed, OneAmerica made it so easy. Both when we first began care and during the pandemic, I was able to focus on helping my aunt, instead of worrying about her long-term care,” Terry said. “OneAmerica really helped us when we needed them, and we were both very grateful for that.”